.NET CLR is the new version of .NET, it has all the common features: ASP.NET 5, Web Forms, MVC, SignalR.

Core CRL is a subset of the .NET Core, which doesn’t depends on GAC, Registry and OS components. It’s designed for Web developers, infact it has only the ASP.NET 5 features; The intention with .NET 5 is that each application only imports and uses the libraries it needs.

DNX contains the components required to run an ASP.NET 5 application. It is described by ASP.NET Github wiki  as an SDK containing everything needed to build and run an ASP.NET 5 applications. The DNX gives us the ability to cross compile a project across different renditions of a Common Language Runtime, and then execute on a specific variant of a CLR. We can compile against a .NET CLR, or a Core CLR, or both.

The following demo shows how to install and develop applications using ASP.NET 5  on Ubuntu.

If you don’t already have an Ubuntu virtual machine, you can easily create it using Virtual Box  or using an AWS free account, here’s the tutorial to setup a simple Ubuntu server + desktop environment on AWS.

The new ASP.NET 5 frameworks tries to remove all the dependencies between ASP.NET and Visual studio IDE: you can choose you preferred code editor. Actually, I use Visual studio code: an open-source/cross-platform code editor powered by Microsoft.

To install Visual studio code on ubuntu, simply download it. When the download is completed extract the zip inside your home folder and type:
sudo ln -s /home/<your_username>/<vscode_folder>/Code /usr/local/bin/code

To run vs code inside a folder, type:
code <project_path>

All ASP.NET 5 project templates can be generated using Yeoman: it helps you to kickstart new projects, prescribing best practices and tools to help you stay productive. 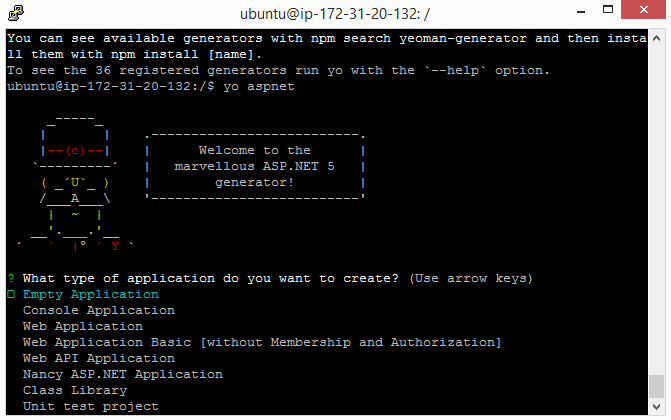 You can choose 8 different project templates, when you select an template, yeoman creates a new folder that contains all application file, to download all application packages and run the application, type:

then dnx run, if the project is a console application,

or dnx web if the project is a web application.

Here you can find an introduction to vNext keyfeatures.

Microsoft has learned that nowadays there isn’t a single dominant platform, developers need to write code that runs on multiple platforms and they should be comfortable writing apps using multiple code editors and IDE. All the future steps of ASP.NET developing process are visible on the official roadmap.