.NET Core 2.1 highlights: standing on the shoulders of giants

Since two years after the 1.0 version, .NET Core has gained a lot of popularity in the software engineering world. The following chart came from the Stack overflow survey 2018: 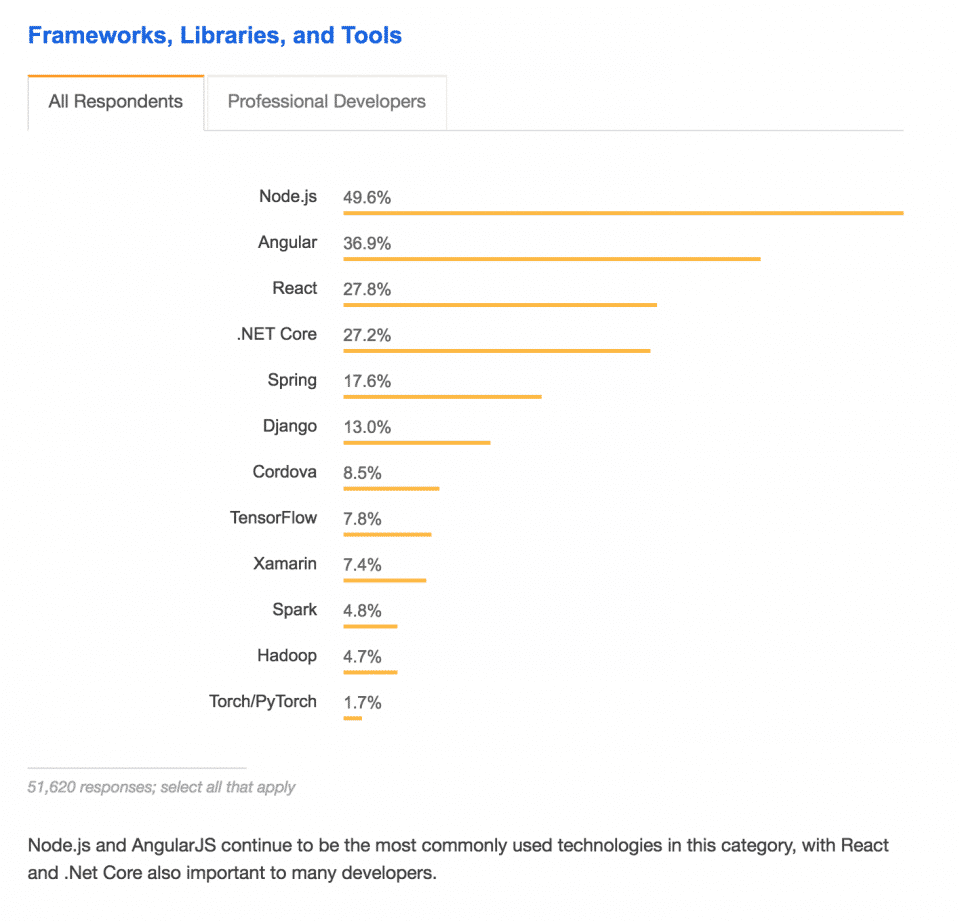 Nowadays, .NET Core is in the top 5 of the most popular Frameworks, Libraries, and Tools.

The metaphor of dwarfs standing on the shoulders of giants expresses the meaning of discovering truth by building on previous discoveries and experience. The point is that the .NET team has learnt from their previous experiences and .NET Core is the result of that experiences applied to a new multi-platform framework.

The framework is movin’ fast, each new release enhance and sometimes change features of the framework. The following article shows some highlights and new feature which are present in the new version of .NET Core 2.1 and ASP.NET Core 2.1.

The .NET team have been thinking of .NET Core 2.1 as a feedback-oriented release after the more foundational .NET Core 2.0 release.  Let’s see some highlights on .NET Core 2.1:

.NET Core comes with a new set of types for using arrays and other types of memory that is much more efficient. Furthermore, Span<T> and Memory<T>  are part of the System.Memory.dll package, the preview of this package is available on NuGet and it is compatibile with .NET Standard 1.1.

Actually, Span<T> and Memory<T> concept goes behind the consumer-use side. Indeed, these new types became useful under the hood of the framework, e.g. for the HttpClient, in order to improve the performance.

If you are looking for more relevant information about the performance improvement and to go in deep on these types,  please take a look to : All About Span: Exploring a New .NET Mainstay

The Windows compatibility pack package is useful for all the developers who want to port existing .NET Framework code to .NET Core. It increases the APIs surface to an additional 20k APIs. You can download the package at the following link : https://www.nuget.org/packages/Microsoft.Windows.Compatibility  The packages also provides some useful APIs in order to detect the hosting OS, for example:

Since it detects if the current OS platform is Windows, it may be useful in order to execute different code depending on the type of platform.

API Analyzer is a Roslyn analyzer that comes as NuGet package. After referencing it in your project, it automatically provides live feedback on API usage and warns about potential compatibility issues and calls to deprecated APIs.

The following chart provides some informations about the improvement. It compares the previous version of .NET Core with the new-one:

Here is some highlights and new stuff from next release.

The HttpClientFactory brings the concept of dependency injection to HttpClient implementation. It provides a central location to manage and instantiate all HttpClient.

The HttpClientFactory integrates Polly.NET. Polly is a .NET resilience and transient-fault-handling library that allows developers to express policies such as Retry, Circuit Breaker, Timeout, Bulkhead Isolation, and Fallback in a fluent and thread-safe manner.

The NamedClient is the default choice.

The method AddHttpClient defines a new namespace which can be used to refer the client inside your services and controllers:

The other way is by referring directly the typed client. You can define a typed client by injecting the HttpClient inside the constructor of new classes, that approach, very DI oriented, is the one I prefer:

As you can see, it allows you to register and inject directly the typed client:

The current implementation of Kestrel uses libuv under the hood. The implementation of the underlying libuv connection semantics has been decoupled from the rest of Kestrel and abstracted away into a new Transport abstraction. By the way, for performance reasons, Microsoft is investing on custom socket implementation inside .NET.  The sockets will replace the libuv async I/O.

Furthermore, it is already possible to configure and try socket transportation, to do that you should configure it on the application Program.cs: