The testing issues in a serverless computing

As said in the previous post about serverless it is hard to test serverless applications. Especially when their complexity grows, it is hard to detect issues before running them on the cloud. Furthermore, from a development perspective, it is hard to deal with the problems if every time we need to re-deploy our services to verify the result.

Some existing testing tools help us to deal with the serverless systems. Speaking about AWS, things like https://github.com/localstack/localstack provides a way to emulate the AWS stack on your machine by installing it or by running a docker image. The point of these frameworks is that they consume a lot in terms of resources and they are not always suitable for integration testing.

The LambdaTestTool is a utility produced by the AWS .NET Team which provides a useful and light way approach to the Lambda testing. Furthermore, it provides a way to debugging your lambda locally by triggering some input events and attaching the debugger of your preferred IDE or code editor.

Recently, the AWS .NET Team also released a new version of the LambdaTestTool with the following PR:

which enables the debugging also for all the lambdas that use the serverless framework.

The LambdaTestTool is implemented as part of the dotnet tool suite (I’ve already written about dotnet tools in the following post: Artless HTTP server using .NET Core), it is cross-platform, and can be installed by using the following command:

Moreover, it is possible to update the tool at the latest version using the following instruction:

The above-mentioned code installs the new dotnet tool on your local machine. Therefore, it is possible to use it to run the lambda locally by configuring your IDE or code editor properly.

The LambdaTestTool runs an ASP.NET instance which returns the following interface: 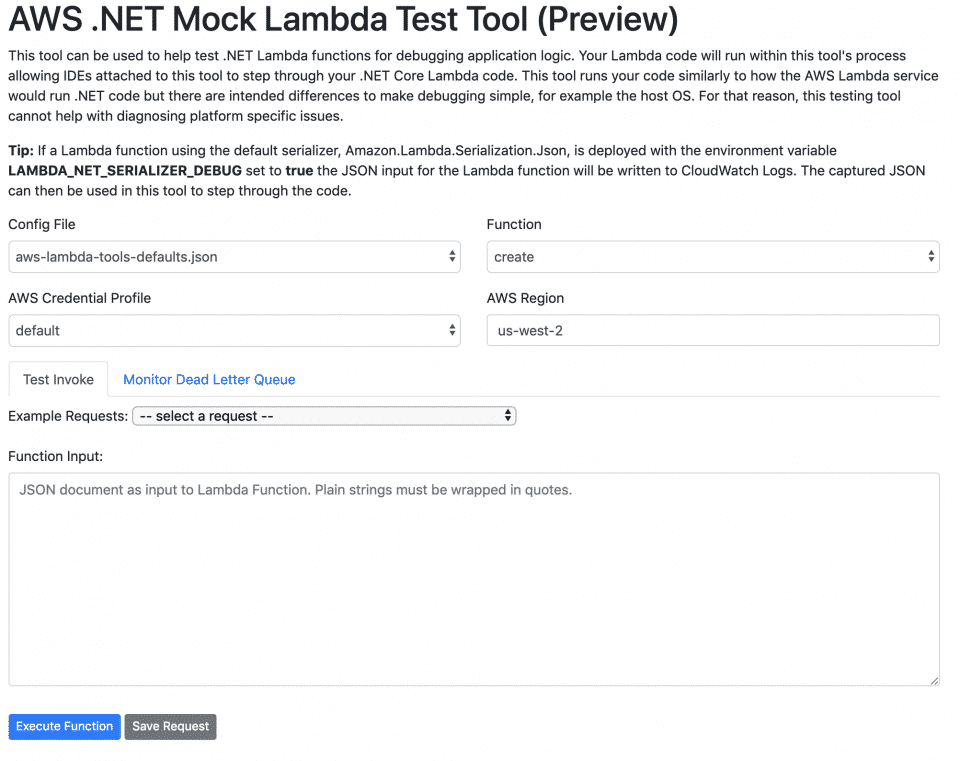 The UI provides a way to select the config file of the lambda, the function in the project to execute, the credentials, the AWS region and the message to send as the input of the function.

The same approach can be taken with a Visual Studio Code, by adding the following section in the launch.json file:

For example, in the case of Rider IDE, it is possible to use the tool by creating a new configuration in the IDE:

The Exe path field refers to the path to the dotnet tool:

The working directory field is the root folder of the lambda project.

It is possible to get more information about the LambdaTestTool on Github: https://github.com/aws/aws-lambda-dotnet/tree/master/Tools/LambdaTestTool. The tool is still in a preview phase, but it is a very useful and fast way when we want to verify and testing a .NET Core AWS Lambda. What’s still missing, is a quick way to integrate the package and run it directly in the code, for example, as a part of a unit testing process.