The following article describes how to developing APIs using Actor model in ASP.NET Core. It will show some benefits of build APIs using actor model pattern and some good reasons about adopting Orleans.NET as actor model framework. This article has been written in collaboration with @francomelandri.

When we think about services, we usually refer to the traditional stateless 3-tier architecture which is composed by a front-end (or multiple clients), stateless middle tier which exposes data and the storage layer. 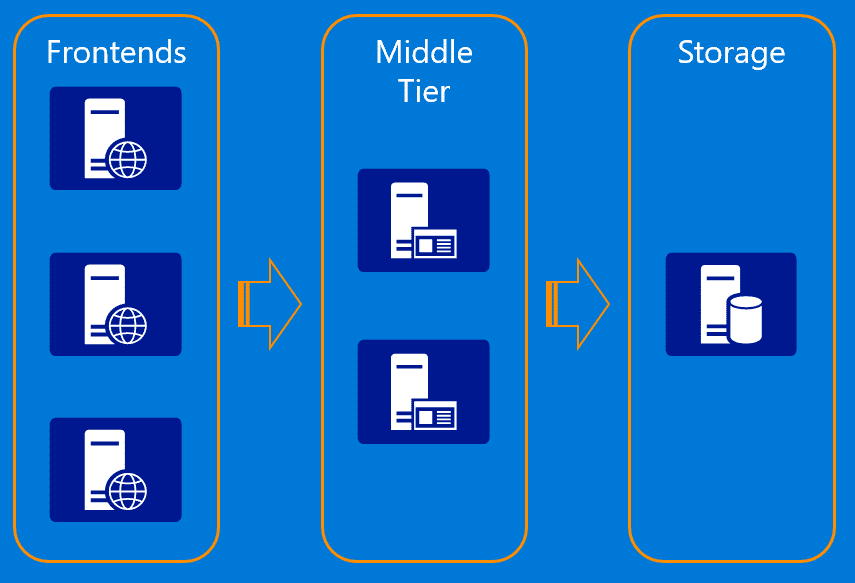 The limited scalability of data layer, which has to be consulted every request, it is usually avoided by using a cache layer between the middle tier and the data layer. However,  cache layer is not the best choice in terms of scalability and concurrency. Sometimes it is necessary a cache manager which can handle all concurrency problems.

The actor model in computer science is a mathematical model of concurrent computation that treats “actors” as the universal primitives of concurrent computation. In response to a message that it receives, an actor can: make local decisions, create more actors, send more messages, and determine how to respond to the next message received. Actors may modify their own private state, but can only affect each other through messages (avoiding the need for any locks).

Actors isolation become a point of strength when you are designing a distributed and high concurrency system. Actor model has gained a lot of popularity over years, therefore some frameworks born with the propose to abstract the actor model principle, for example: Akka.NET.

Akka.NET exploits the actor model to provide a level of abstraction that makes it easier to write correct concurrent, parallel and distributed systems. The actor model spans the set of Akka libraries, providing you with a consistent way of understanding and using them.

Orleans concept is similar to Akka, since Akka.NET still burden developers with many distributed system complexities, Orleans approach is to provide an higher-level of abstraction over that pattern.

The following code shows an actor interface declaration in Orleans:

Actors are the basic building blocks of Orleans applications and are the only units of isolation and distribution. Orleans framework calls actors Grain. Grains actually are virtual actors, they have 4 key properties: perpetual existence, auto instantiation, location transparency, auto scale-out;

While Orleans may execute turns of different activations in parallel, each activations always executes one turn at time.

In Orleans programming model, implementing interfaces is the only way to declare a grain, Let’s take a look to the following example:

On the other side, client will call the ValueGrain through the use of the IValueGrain interface:

The ValueController calls the grain by referring the interface IValueGrain, since the IValueGrain interface implements the IGrainWithInteger interface, the client will pass an integer in order to activate our grain. Another key point is that the result is always exposed as Task(of T) or Task;

In order to send some requests to grains, the client should be configured via a ClientBuilder. The following code shows an example of client configuration:

Let’s focus on some key points:

Clients aren’t enough to setup an actor model application. Grains live in cluster of server or processes, which are called Silos. So, in order to activate  grains, we should start a cluster of silos.

Silo configuration is, in broad terms, specular to ClientConfiguration. Hence, Orleans exposes the SiloHostBuilder through the nuget package Microsoft.Orleans.Server.

Let’s focus on some key points:

Orleans is a product by Microsoft Research, it was released in 2014. Since Orleans has very different approach than classical N-tier applications, Microsoft research also released a best practices document.

First of all, you should consider Orleans when you have significant number of loosely coupled grains. Secondly, grains must be small, therefore large grains with bulk operations does not give any advantages in terms of performance.

Finally, grains must be isolated, since a huge number of accesses between entities causes performances degradations.

In order to understand the Orleans cluster management, you should consider some key characteristic. First of all, the framework automatically manages clusters lifecycle, hence failures are the norm and can happen any time.

The Grain persistence can use different out-of-box providers, for example: Azure table or ADO.NET. Orleans also allows to extend and implement custom providers, hence you can connect your grains with not supported data sources.

In order to implement the state persistence into our project we should proceed with following steps:

Finally, we need to modify the Program.cs file of Silo in order to setup a connection between the our silo and database:

Once our Silo is configured correctly, we can proceed by updating grains code:

ValueGrain has a new decorator: [StorageProvider(ProviderName="OrleansStorage")]. It indicates that our grain uses a storage provider which is called: OrleansStorage.

Furthermore, ValueGrain extend the Grain<SavedState> generic class: the SavedState class is an representation of the state of our grain.  The SavedState is stored inside OrleansStorage alias, which, in that case,  stores into a SQLServer instance.

Let’s take a look to some infos stored into Storage table of SQLServer:

The StorageProvider stores some key informations about the state of grains: GrainIdHash, TypeHash, Payload (in JSON format).

The following chapter describe how to create a Cart API using Orleans and ASP.NET Core. The solution implement an ecommerce Cart web service, due to the demo purpose, we will keep the service as simple as possible. Let’s take a look to the solution structure:

Grain and GrainInterfaces projects contains all grains and corresponding interfaces. First of all, this is the ICartGrain interface definition:

It implements the IGrainWithGuidKey interface, so the grain will be stored using a Guid identifier. It also defines 3 methods: GetCart, GetProducts, AddProduct; The following interface exposes all the necessary methods in order to get and add products to our cart;

The class uses the [StorageProvider(ProviderName="CartStorage")] in order to store some informations about the cart status. If the cart does not exists, it will be created with an empty collection of products.

The AddProduct method simply accept a product and add it to our collection of products, therefore the GetProduct method retrieves all the products stored in a specific basket.

The Silo project purpose is to configure Silo in order to host ICartGrains. It contains only one C# file, Program.cs :

Program.cs simply configure the Silo and all the related providers, for example, it uses the .AddAdoNetGrainStorage in order to configure CartStorage. Finally, it uses UseDashboard() in order to provide the out-of-box Orleans monitoring dashboard.

To be clear, the following schema gives an overview of the architecture: 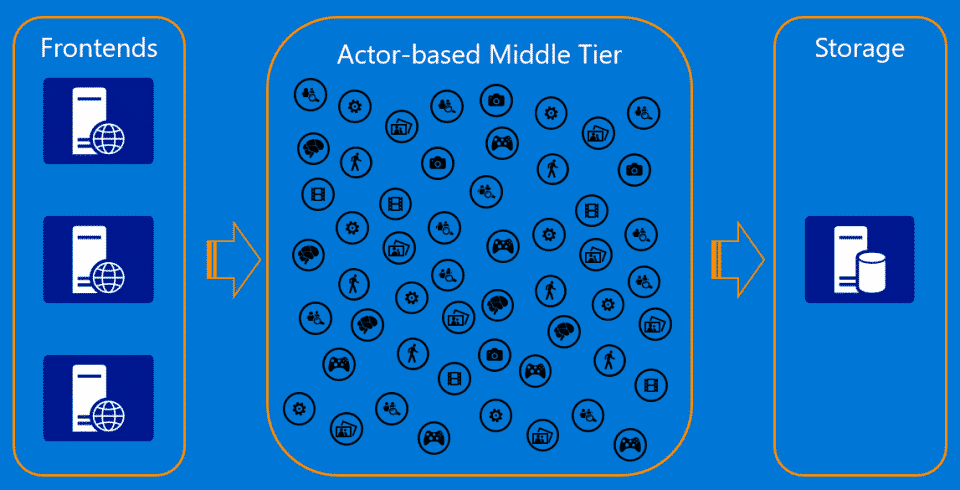 The front-end part is our  Cart.API project. The Actor-based middle tier is contained in Silo, Grains, GrainInterfaces project and, finally, Storage is our database.

Let’s start by taking an overview on the Startup.cs file of this project:

The file implements all the configurations required to run Orleans client and it creates 5 different clients. It also registers the ICartGrain interfaces. The second core part of Cart.API project is the CartController, which exposes create and update routes:

The CartController simply uses grains to get and update informations related to Cart. Above all, I suggest to put a request and response models instead of state model, in this demo the controller actions refer directly to Product state.

Finally, here is all the routes exposed by our Cart.API:

Silo project also exposes the Orleans dashboard at the following url: http://localhost:8080/. It contains some useful informations about grains and silos and it also provides some insights about the status of the system.

Orleans is a powerful tool to implement actor model pattern and it is very useful in order developing APIs using Actor model in ASP.NET Core. It provides an high level abstraction hence, it simplify the implementation of an high distributed system. There are more concepts about Orleans which are no treated in this article: Timers and Reminders, Dependency Injection, Observers, Stateless Worker Grains; They contribute to empower your high-distributed system.

You can find the repository on Github at following link: https://github.com/samueleresca/blog-orleans-deepdive.