Recently, I have been working on a fuzzer for testing the resilience of a parser. The fuzzer detected some crashes in a parser running on top of well-established production code. That made me realize how critical this testing technique is for the security of a system.

Fuzz testing is a broad topic with many approaches and strategies.

This post summarizes some techniques for fuzz testing and the learnings I have made. It also goes through some fuzz tests running on some cloud-native foundation projects, such as etcd.

The most basic example of a fuzzer might be a function that generates a random value. The generated value is then used as an input for the system under test:

This is a very basic example of fuzzing. Usually, a fuzzer implementation is more complicated than that.

Before proceeding, let's clarify some terminology by describing an usual fuzzer architecture:

In case the system under test crashes, a new crash report file is generated.

The schema above defines a fuzz target. In concrete, fuzz targets usually have an implementation like the one below:

In Black-box fuzzing, the fuzz engine does not know anything about the system under test implementation. An example of black-box fuzzing might be a fuzz target that calls an application running on a container exposing an HTTP API.

Below is the schema that describes the scenario: 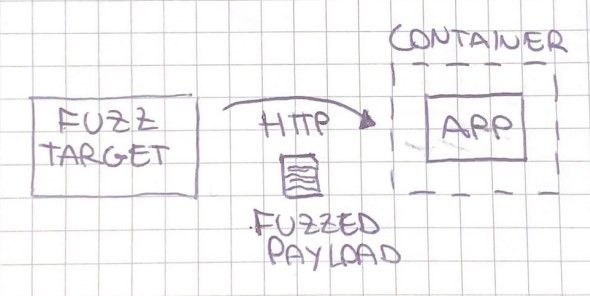 The fuzz target calls the system under test through a client:

Keep in mind that fuzzing across the network will slow things down. Futhermore, is hard to detect crashes in the system under test because is running as a separate instance and is not running the fuzzing process. see the Fuzzing in a distributed systems world for more details and solutions.

Given the following snippet of code:

We can assign an edge for each branching in the code:

The flow of the code above can be summarized with the following control flow graph, where each branch is an edge of the graph:

AFL++ uses the control-flow graphs in the instrumentation phase by injecting the following pseudo-code in each edge:

The cur_location property identifies the current path within the code using a randomly generated value. The shared_mem takes a count of the amount of time a certain path (source, dest) (given by the XOR cur_location ^ prev_location) has been hit. On top of that, the perv_location value is overridden in each iteration with the right bitshift of the cur_location variable. In this way the injected code keeps track of the ordering: A -> B diff from B -> A.

In this way, AFL++ know which branch has been hit by a specific input and if it is worth continuing for that path.

As mentioned above, the coverage algorithm keeps track of two parameters:

This information is used for triggering extra processing. When an execution contains a new tuple, the input of that execution is marked as interesting. The hit counts for the execution path are bucketed in the range:

If the algorithm detects a variation between hit count buckets then the input is marked as interesting. This helps to detect the variations in the execution of the instrumented code.

Even so, it is important to mention that coverage-guided fuzzing does not come for free. Instrumenting the system under test means adding an overhead at runtime. On some occasions, this overhead is not sustainable.

There has been some effort to optimize coverage-guided fuzzing recently. Most of the research focuses on better ways of instrumenting the code[8] and on more meaningful coverage metrics[9].

We described two fuzzing techniques: black-box and coverage-guided fuzzing. This section gives some guidelines on which type of fuzzing we should use and when.

In general, coverage-guided fuzzing provides better coverage and is more effective. The downside is you need to instrument your target first. This might work well in self-contained libraries, but it might be hard to set up in more complex codebases.

The advice is to examine the system under test and understand the complexity of the codebase:

Fuzzing in a distributed systems world

In the distributed system era, most of the services talks over the network. Fuzzing a network service is not easy for two main reasons:

The general approach for fuzzing over the network is to change the source code to read from stdin instead of relying on the network. [4]

For example, AFLplusplus/utils/socket_fuzzing is an util embedded in AFL++ that provides a way to emulate a network socket by sending input in the stdin.

If changing the source code is not viable, keep in mind that fuzzing over the network is still an option.

aflnet/aflnet: AFLNet provides a suite for testing network protocols. It uses a pcap dump of a real client-server exchange to generate valid sequences of requests while it keeps monitoring the state of the server. The input sequence is then mutated in a way that does not interfere with the rules of the protocol.

microsoft/RESTler provides a way to test a remote-distributed black box [6]. Even if it is not possible to instrument the code of a distributed blackbox, RESTler takes a hybrid approach between a blackbox and coverage-guided fuzzing by measuring the fuzzing effectiveness by introducing a response error type metric. Every time that the distributed blackbox returns an HTTP error type (HTTP status codes from 4xx to 5xx) is considered a crash, and the coverage metrics triggered.

RESTler is HTTP REST-based. What can we do when the system under test utilizes a protocol that is not HTTP? Structure-aware fuzzing becomes handy when you want to compose a message following some rules.

One of the most common tools that implement structure-aware fuzzing is google/libprotobuf-mutator.

This library runs on top of others fuzz engines and mutates the inputs following a protobuf definition. For example, the following proto file defines the structure of a message:

The Msg above can be reused as input for a fuzz target as shown below:

This approach allows defining fuzz inputs based on certain rules. So it excludes all the cases where the corpus provided by the fuzz engine is not compliant with a particular syntax or protocol.

The next section focuses on a concrete example of fuzzing on the etcd-io/etcd OSS project.

I recently contributed to etcd fuzzing to solve the following issue: etcd/issues/13617.
The etcd process for receiving requests has two main steps:

The goal was to ensure that API validators reject all requests that would cause panic.

In practice, below is the approach that has been taken:

The following PR implements the approach described above.

Ensure that input validation between API and Apply is consistent #14561.

The implementation uses the new toolchain fuzzing released with Go 1.18, see: go.dev/security/fuzz. Let's start by taking a look at one of the fuzz tests in the PR:

The above implementation shows a fuzz test case for an etcd RangeRequest. The test uses the fuzz capabilities provided by Golang.

The fuzz test proceeds by calling the checkRangeRequest function, which implements the validation for the request. In case the validation returns an error, the rest of the test is skipped using t.Skip. In case the request is valid, the test proceeds by calling the apply method (txn.Txn function). The fuzz test will fail if the txn.Txn function panics, otherwise, the test is successful.

The PR also add a fuzzing.sh script that is used to execute the fuzz tests. The script is then embedded in CI using a GitHub Action definition. Below is the core command defined in the fuzzing.sh script:

The command executes a specific target (e.g.: FuzzTxnRangeRequest) with a specific fuzztime.

Another open-source contribution I made recently around fuzzing is the following design proposal for the .NET toolchain #273 - Add proposal for out-of-the-box fuzzing. The proposal was highly inspired by the introduction of fuzzing within the Go toolchain. The main reasons that triggered this proposal are:

The proposal got rejected with some good news: the .NET team is already exploring some possible paths forward, and some internal prototyping effort has already been made.

A few months back, the Cloud Native Computer Foundation (CNCF) went through some effort in the fuzzing space:

The CNCF post goes through a quick introduction to fuzzing and the purposes of this technique. Futhermore, the post shows a list of fuzz tests implemented within the CNCF projects, such as Kubernetes, etcd, and Envoy.

The post's security reports highlight the various crashes has been found in the OSS projects of the CNCF foundation. Surfacing the need for these security practices in the OSS software.

The .NET fuzzing design proposal shown before is tentative to democratize fuzz testing in the .NET ecosystem. The easier is accessing to this security practice, the higher the chance that fuzzing is adopted in the development process. Thus, the shipped software has higher security and resilience standards.

Go 1.18 took a similar approach by including the fuzzing capabilities within the language toolchain. The Go native fuzzing proposal has brought up some interesting discussions available at golang/go/issues/44551.

LLVM took a similar approach long time ago by including libFuzzer in the toolchain.

Democratizing security practices such as fuzzing within the OSS ecosystem is becoming crucial. Especially with the increasing involvement of OSS projects as part of enterprise solutions.